Mary Jane Uttech said working with her teen friend, Bridgette Bice, has been “more crazy lately,” since she is now a high school graduate with a job at a nursing home. “She has to get her schedule first,” said Uttech, of Lapeer, a retired deputy director at the Cortland Health Department. 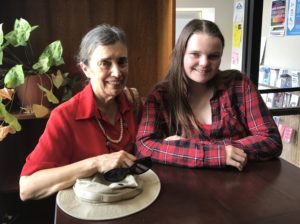 Uttech and Bice have spent about three hours a week together for the past eight years — hiking the Finger Lakes Trail, baking cookies, kayaking and lately, prepping for college. They are mentor/mentees in the Family Counseling Service Youth Assist program, which pairs an adult with a child who faces challenges.

“It’s modeled after the Big Brother, Big Sister program,” said Leslie Wilkins, director of Cortland Prevention Resources on Main Street, a division of Family Counseling Service. “It’s for anyone sixth-grade and up that needs extra support.”

“It’s not unusual,” Wilkins said for a pair to work this long together. “It happens. Does it happen enough? No.” “Ces Scott just sent me a picture of this grown woman that was her mentor, back in Bridges. They are still in touch to this day,” Wilkins said of the pair, part of the YWCA’s mentoring program.

“We need more mentors,” said Carol Tytler, a marketer at Family Counseling in Cortland. “There are kids on the waiting list who would like to have a mentor. If interested, give us a call.”

Bice said her challenge was growing up with just a mom and not having a father figure in the picture. “M.J. and her husband stepped up and helped me through school.”

At first she was struck that Uttech was “a lot older than me. But after two or three times hanging out, I couldn’t tell she was older than me. She went down to my level.”

“Word that — ‘young at heart,’” Uttech said, and laughed.

Mentors need a sense of humor, patience and a lot of common sense, Uttech said. “You don’t want to give bad advice.” When asked of a time that Uttech was particularly helpful, Bice gazed off into space. “Which time,” she said, laughing.

“Growing up is hard to do,” Uttech said.

“The time M.J. and her husband have put in, they didn’t do special things just for Bridgette. They brought her into their life … ‘Let me show you how to plant a garden, or cook something.’ Something they were already doing in their life,” Wilkins said.

“It’s as simple as: You have someone who is concerned for them and  treats them as if they matter. They are important,” Wilkins said. As the relationship evolves though, they may branch out, Wilkins said. 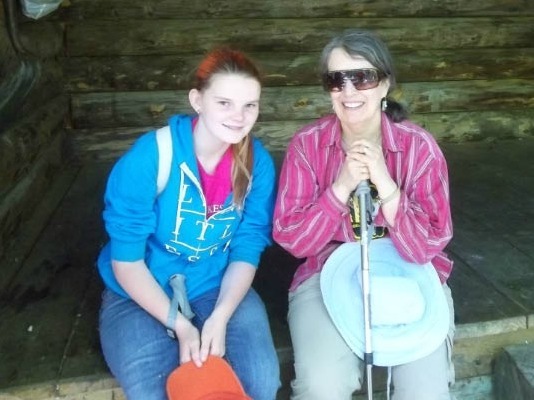 When Bice complained about it, Uttech pointed out:  “You are getting treated like a princess.”

Bice became a member of the “orange hat society” a group of Finger Lakes trail hikers who have their photo in the Finger Lakes Trail Conference News.

Bice, for her part, got Uttech to go swimming in Uttech’s pond. “She claims it’s a pond. I see it as a lake. It is long enough to be a lake,” Bice said. “I convinced her to go in it.” Uttech made a sign of distaste: “snapping turtles, leeches.”

Bice learned how to kayak and canoe and enjoyed going in Uttech’s rowboat on her pond. They also ventured to Dryden Lake with the kayak. “She still won’t let me tip that canoe,” Bice said. 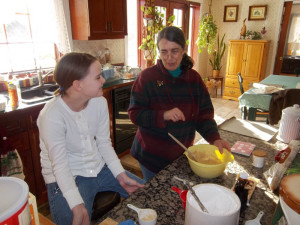 At first the goal was: Get Bice through high school and avoid alcohol and drugs, Uttech said.

“She certainly matured. And  she’s quite goal driven. I am so proud of her. How she overcame obstacles … she graduated. She has her C.N.A. She doesn’t use drugs and alcohol and is smart enough to take a stand against it … She is on firm ground,” Uttech said.

Bice has been working in the dietary department at Crown Park in Cortland. She just obtained her nursing assistant certification and plans to pursue nursing at Tompkins Cortland Community College.

Uttech fully expected Bice to not want to continue their relationship when she hit her teenage years.

“Bridgette has always made time for me. That has been a pleasant surprise.”

And they will continue that relationship. The goal now, Uttech said: “Get through college.”

This article ran in the Cortland Standard on Thursday, June 29, 2017 and is reprinted here with permission.

Interested in being a Mentor? To learn more about the mentoring program, contact Cortland Prevention Resources at (607) 756-8970.