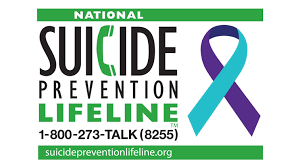 Why are there so many conversations and events that focus on suicide in September?

Suicide is a serious public health issue. Each year, more than 40,000 people die by suicide in the United States leaving behind family and friends to navigate the tragedy of loss. Suicide is the tenth leading cause of death overall in the United States and is the third leading cause of death among youth between the ages of 10 and 24. Even though these statistics are staggering, research has found that increasing awareness and education can help save lives.

Like many other topics related to mental health, suicide is often seen as a taboo and highly stigmatized topic. Suicidal thoughts, much like mental health conditions, can affect anyone regardless of age, gender, sexual orientation, or background. Suicidal thoughts, even though common, should not be considered a normal reaction or coping skill to trauma and often indicate more serious issues are at play. Most cases of suicide are often the result of an untreated mental health condition. Taking the time to learn the risk factors, warning signs, and protective factors of suicide can help save lives.

Suicide prevention seeks to reduce risk factors while increasing the protective factors that build resilience and a buffer for those most vulnerable to suicide. It is important to remember that risk factors and warning signs are not the same things. Risk factors are characteristics of the individual or their environment that increase the possibility of death by suicide. Please, keep in mind, that many people will have these risk factors and will not go on to attempt suicide.

Suicidal behavior is complex, and there is no single cause, in most cases, many different factors play a role in a suicide attempt. However, people at risk often share similar characteristics. For example, stress related to discrimination, such as family rejection, violence, bullying, etc. is a known risk factor for suicide attempts among lesbian, gay, bisexual, transgender, and queer (LGBTQ) youth. As another example, stressors that challenge traditional male gender roles, including unemployment and divorce, are identified as serious risk factors for suicide attempts among middle-aged men. Other risk factors for anyone include but are not limited to, exposure to others suicidal behavior including celebrities, a previous suicide attempt, depression, substance abuse disorder, and having easy access to guns or other firearms in the home.

Warning signs extend beyond risk factors and are indicators that an individual is at immediate risk. These are red flags that an individual is actively contemplating or planning to take their own life. Feelings of hopelessness, guilt, and shame, extreme pain both physical and emotional can all be warning signs. Also, changes in behavior or mood indicate that a person may be at an increased risk. Withdrawing from friends and family, losing interest in favorite activities, changes in eating/sleeping habits, using drugs or alcohol more often, and talking or thinking about death frequently, these are all warning signs to be aware of.

Many people feel powerless or unprepared to address a loved one who may be suicidal. As mentioned before there are protective factors, characteristics or environmental factors that safeguard ourselves and those we care about from suicide. Significant protective factors include access to effective behavioral health care, inclusion with family, community and social institutions, learned life skills to problem solve and cope with difficulty and change, a sense of purpose, and lastly personal beliefs that discourage suicide.

Suicidal ideation and action is a sign of extreme distress, and should not be ignored or seen as an empty cry for attention. Recognizing the warning signs is often a critical step in helping an at-risk individual get the help they need. If you have concerns about yourself or someone you know, please call the National Suicide Prevention Lifeline toll-free at 1-800-273-TALK (8255). This line is available to everyone, twenty-four hours a day, seven days a week and is strictly confidential and free of charge.

If you would like more information about local efforts in suicide prevention training and resources, please contact Cortland Prevention Resources, a division of Family Counseling Services at (607) 756-8970 or e-mail Colin at calbro@fcscortland.org.