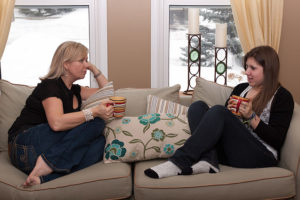 By Linnay Harmer and Mary Dykeman –

Children and teenagers are naturally curious about alcohol – they see people drinking- and they want to know more. Kids will be influenced by their friends, their teachers, TV, films and the media – but in most cases, parents have the biggest influence on their children’s behavior. So you’re in a good position to make sure they have the facts about alcohol and drinking, and can make sensible choices in the future.

The time to start talking to them about underage drinking is now.

It’s easy to underestimate how early underage drinking begins, as well as the amount of alcohol teens drink and the risks involved. Still, underage drinking isn’t inevitable. You can encourage your teen to avoid alcohol by talking to him or her about the risks of underage drinking such as incurring a DUI charge (you could view here to check out the various ways to defend yourself in situations such as this and the charges you might incur for the same) or maybe a possible accident, and the importance of making good decisions.

Teens are particularly vulnerable to alcohol use. The physical changes of puberty might make your teen feel self-conscious and more likely to take risks – like experimenting with alcohol – to fit in or please others. Coping with stress and challenging transitions, such as going from middle school to high school, moving, or dealing with the effects of divorce, might also influence a teen to drink. Your teen might have trouble understanding that his or her actions can have harmful consequences in case they are caught driving under influence. Hence, it would be wise to keep them informed that they can try these attorneys here, who can provide assistance in a drunk driving case. It would help them remain mentally strong if they ever fall prey to one such scenario, maybe due to peer pressure.

Other risk factors include:

It can be tough to talk to your teen about underage drinking.You might be unsure of what to say, and your teen might try to dodge the conversation. To increase your odds of having a meaningful discussion, choose a time when you and your teen are relaxed. Don’t worry about covering everything at once. If you talk often, you might have a greater impact on your teen than if you have only a single discussion. All you have to do is be honest about your feelings and tell them about the news you’ve been reading. If you know anything about the law, casually tell them about Juvenile Crime Consequences, and then listen to what they have to say. Most of the time, you can judge a person based solely on what they say.

The best thing you can do is be honest with your child and make this an ongoing topic of conversation in your household.